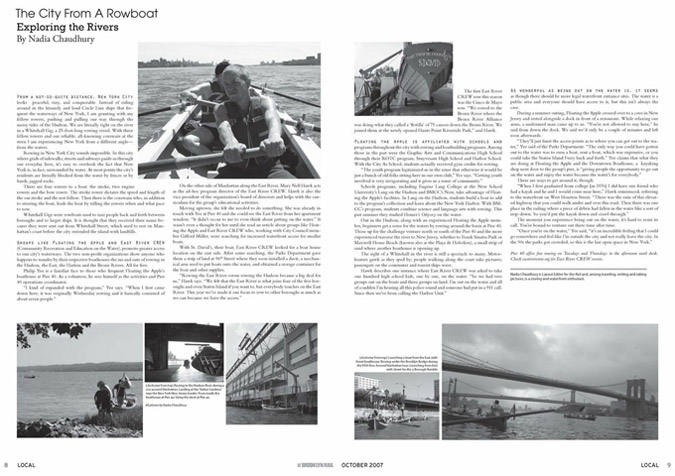 PLEASE NOTE THAT THE FOLLOWING IS NOT A COMPLETE LIST OF COVERAGE.

2011.08.12 New York Times City Room; On New York’s Low Seas: Day 5 by Corey Kilgannon, this piece accurately depicts the feelings we share while rowing out to the Brother Islands http://cityroom.blogs.nytimes.com/2011/08/12/on-new-yorks-low-seas-day-5/#preview

2011.08.18 Comment posted: East River C.R.E.W. (Community Recreation & Education on the Water), watches cormorants offshore from Mill Rock Island each Tuesday during public rowing in 25-foot boats that leave from the East River Esplanade at 96th Street. So close to the FDR and only the sound of oars, birds and the water! What an experience – from there you can see three boroughs, few traces of the city, and hardly any other boats. Mary Nell Hawk, New York, NY

EXCERPT FROM A LENGTHY COVER STORY IN OUR TOWN PRINT EDITION:

The East River C.R.E.W. (Community Recreation and Education on the Water) is also advocating for a facelift for the esplanade. The group offers free open-water rowing sessions every Tuesday at 5 p.m. that launch from the East 96th Street esplanade entrance. According to C.R.E.W. member Mary Nell Hawk, its goal is to raise the profile of the East River through rowing and estuary education. Nell said that in the future, the group would like to see safer, more clearly marked pedestrian crosswalks, shade arbors installed near their boat launch site and educational signage dispersed throughout the esplanade.

2007.10 Brooklyn Rail; The City from a Rowboat: Exploring the Rivers by Nadia Chaudburyhttp://www.brooklynrail.org/2007/10/local/

This story was reprinted on Nadia’s blog http://mysticchildz.blogspot.com/search/label/Whitehall%20Gigs

2007.06.28 New York Times Fashion & Style section; When the Workout Brings Out the Crowd (note: the photo was also a full-page section cover color photo on the print edition) http://www.nytimes.com/2007/06/28/fashion/28fit.html