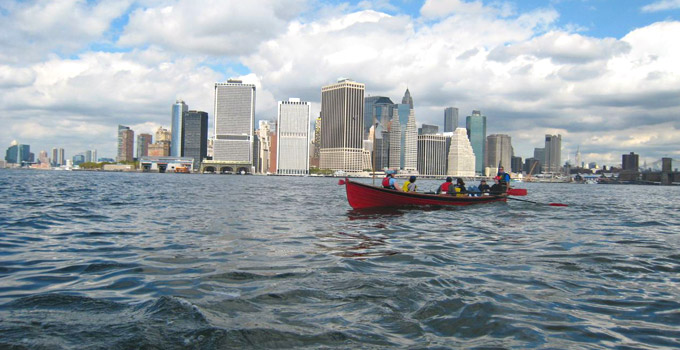 New York City always has something happening. And these days, most of it is on land. That makes it easy to forget sometimes about the rivers that surround it. Even harder to remember is that they’re not only rivers, but estuaries — fish nurseries — made of both salt and fresh water and part of the larger Atlantic Ocean.

The East River is a narrow body of water connecting two parts of the ocean, the NY Harbor and the Long Island Sound and flows right through the heart of New York City. Since it actually doesn’t have any fresh water, only salty, the correct term for it is “tidal strait.” But sailors have used the word “river” for hundreds of years, so common custom won out. The rivers and straits around NYC are part of a larger area called an estuary. Check out our Estuary Guide and also our Estuary Guide Coloring Book.

An estuary is where river waters meet the sea. The changing tides meet the water flowing out to the ocean and this leads to a great deal of mixing. This is one of the reasons our harbor waters are so rich in wildlife and appear murky.

While inland rivers travel in only one direction, the East River’s current changes with the time of day. Sometimes it heads North-East to Connecticut and at other times the water flows south to New Jersey. This is because of the way the tides flow through the strait coming at certain times of day from the Long Island Sound, and at other times from the New York Bight (the bay formed by a bend in the coast).

KNOWING THE TIDES IS A VITAL PART OF BOATING ON THE EAST RIVER.