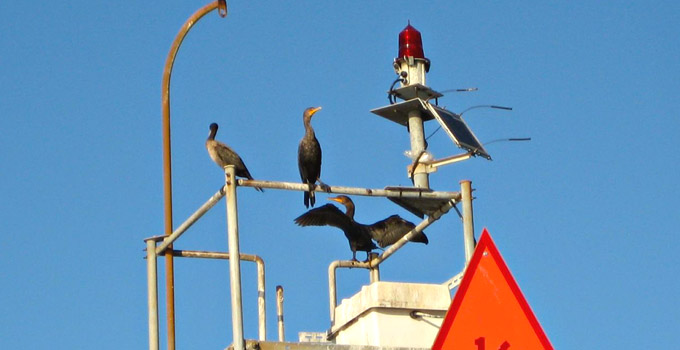 The East River and its environs are teeming with wildlife. From microscopic plankton to great Blue Herons, our river has it all. You can see a great deal of wildlife when you explore the East River from one of our Whitehall gigs. The quieter your boat, the less likely you are to spook the many shy and unusual creatures that surround us. An estuary is a valuable place for global food chains.

the estuary as a bird watcher’s paradise:

A blog by Nick Dee at nycyoudontsee.blogspot.com/2010/06/mill-rock-island.html gives a brief history of about Mill Rock Island, the closest of three bird sanctuary islands easily reached by rowboat from East 96th Street. Others are North Brother and South Brother Islands in the East River between the Bronx and Queens, just beyond the Robert F. Kennedy Bridge (formerly, the Triborough Bridge).

Cormorants, egrets, herons and American oystercatchers are some of the birds that can be seen. More than a dozen species of water birds have returned to the area since the 1970’s. There are about eight species of heron and egret alone. Mill Rock Island is home to 50 pairs of black-crowned night heron.